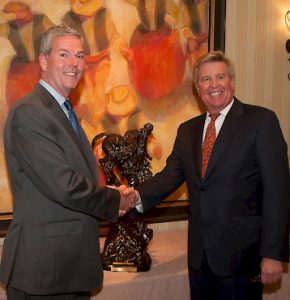 Schledwitz accepted the award at the annual conference of the Food Processing Suppliers Association in Carlsbad, Calif. on Thursday, March 16. The award is given annually by Meatingplace, one of the nation’s leading information sources for the red meat and poultry processing industry.

“Karl Schledwitz is a modern-day Dick Knowlton who has found ways to transform existing companies into entrepreneurial giants,” said Bill Kinross, Meatingplace publisher. “We need industry leaders like Monogram to continue to advance our industry.”

Knowlton, the former chairman of Hormel, Inc., is regarded as one of the legendary leaders in the meat processing industry.

Schledwitz, along with his partner Wes Jackson, founded Monogram Foods in 2004 after they purchased King Cotton and Circle B brand meats from the Sara Lee Corporation. Based on the business formula of capitalizing on underutilized, affordable assets and neglected brands with major potential growth, Schledwitz and Jackson grew their small company of nine employees into one that today employs over 2,700 people working at eight manufacturing facilities in seven states. In total, through plant purchases and expansions, Monogram has saved over 1,000 jobs and created over 1,300 jobs since inception.

In making its decision to honor Schledwitz, Meatingplace also recognized that under Schledwitz’s leadership, Monogram Foods last year invested over $35 million in plant expansions and upgrades across all Monogram Foods locations. This year, Monogram has plans to invest close to $40 million in continued plant upgrades.